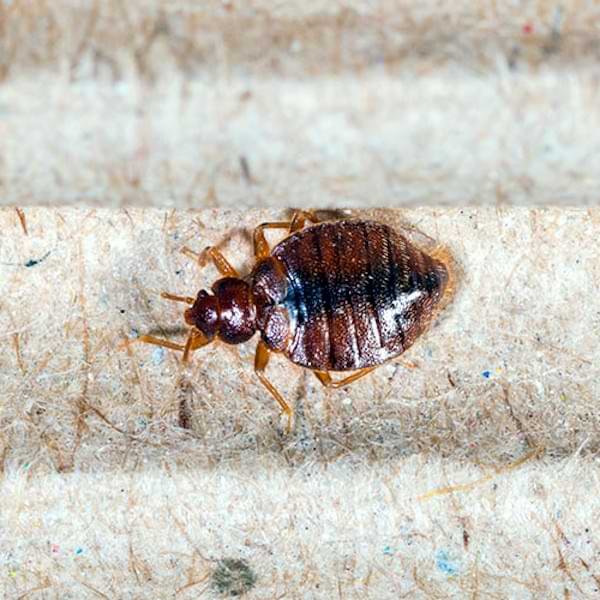 Bed bugs (Cimex lectularius) are common parasitic insects that feed on the blood of humans. Their numbers throughout the world have increased with improved travel networks and a tolerance to some insecticides. They can be a particular problem in multi-occupancy buildings with rapid resident turnover, such as hotels, hostels, holiday camps and blocks of flats.

Bed bugs are small and flat and able to squeeze into tiny cracks and crevices on mattresses, bed frames or divan, headboards and inside furniture. This is where they spend most of their time. They prefer to live in groups and are often found in clusters where the adults, nymphs and eggs are together in a protected area.

Generally nocturnal, they emerge at night to feed on the blood of their human hosts. They are drawn to sleeping humans by body heat and expelled carbon dioxide. An individual bed bug will feed a couple of times a week, but can also survive up to a year without food.

Bed bugs are spread as they travel in luggage, on clothing and inside furniture. They can be found in hotels, cinemas, trains, aeroplanes and other public places where people are at rest for a period of time.

Bed bugs are not a known carrier of diseases. However, they bite and feed off humans, which can cause considerable distress. Not everyone will react to their bite, but some people will experience reactions causing severe irritation, bumps, rashes and blisters.

Bed bugs can also seriously effect the business reputation of commercial ventures, such as hotels.

As they are nocturnal, bed bugs are rarely seen wandering around during the day. Actual specimens and signs of their presence are more prevalent in the area around the head end of the bed, although in large infestations they can be found anywhere.

Bed bugs are notoriously difficult to eradicate, due to their ability to hide away in the smallest of cracks and crevices and their resistance to some pesticides.

Any treatment programme has to be conducted with the full cooperation of the customer, who should undertake their own steps to assist, such as washing certain items of clothing and bedding in a hot wash and preparing the their premises for the procedure. Extensive directions and guidance are given to help this process.

All stages of the bed bug life cycle can be destroyed with heat. We therefore use specialist bed bug steam equipment to treat any areas we identify as harbouring them with a high temperature dry steam. This is then followed up with a thorough insecticide spray using a combination of specialist professional use products, which kill bed bugs on contact and leave a residual coating that works for the following weeks. We then maintain contact with the customer to monitor the situation and assess whether follow up action is needed.